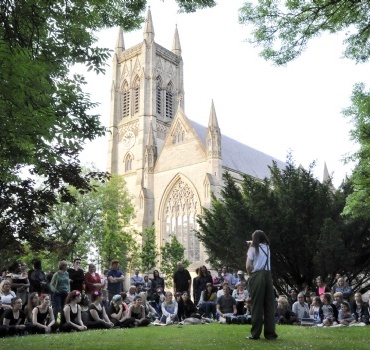 A PAIR of star-crossed lovers took to the stage to give Shakespeare's Romeo and Juliet a sensational modern day makeover in a stunning open air production in the grounds of Bolton Parish Church.

An invite only audience on the first night were left wowed and delighted by the production by performing arts students — joining them on "stage" at the end of the play.

The students at Bolton College brought the Bard's tragic love story in to the 21st century, swapping Verona for Bolton, as they performed Ian Kershaw's Star Cross'd, with the playwright, and his wife Julie Hesmondhalgh, the much loved Coronation Street, among the VIPs for the opening night  of this "unfaithful re-working of Shakespeare's Romeo and Juliet".

Set in modern day Bolton, the audience watch — and follow on foot — the love story between a local boy and girl unfold against a backdrop of a spate of violence between the feuding Capulets and Montagues in the beautiful setting of the church grounds.

The challenges of performing in an open air “theatre” did not faze the cast, which was also made up by secondary school pupils including Mount St Joseph Pupils, and mixing traditional Shakespearean language with modern day lines flowed naturally.

Dance scenes and superbly delivered comic lines referencing well know parts of Bolton, provided some light relief to the powerful aspects of the play — which has a clever twist .

The cast were led by strong leads Francis Kirk, aged 20, who plays the role of Robbie and Aminata Sow, aged 18, who plays Judama.

Aminata said: "It was amazing to perform the play, I was so nervous beforehand and it was unbelievable to do it.

"All the cast were fantastic, the school children did so well."

"We got the response we hoped for."

Julie said: "The production was amazing, it was wonderful to see so much talent.

"They had so much confidence and were not remotely nervous. This is an experience they will never forget."

Ian added: "The production was amazing.

"The performers have invested their time and have achieved something amazing in such a beautiful setting."

The play runs until Friday, June 19th, tickets are available online at www.ticketsource.co.uk/boltoncollege or alternatively you can pay on the door.