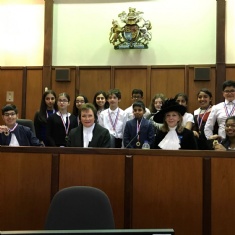 Pupils from the MSJ Law Club competed in the North Cheshire heat of the Mock Trial competition on Saturday 9th March 2019!

The students have been working on preparing a prosecution and defence case which they presented before competing against other schools from across the North West.

The pupils in year 7, 8 and 9 were complimented on their conviction, commitment and professionalism by judges at the competition.

The photo above shows the students who attended the Mock Trial competition alongside Judge Knight and High Sheriff of Cheshire at Warrington Combined Courts.